If you cry in the middle of the forest.... Can anyone hear you? 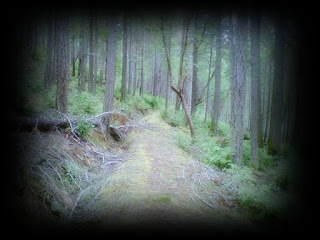 The answer is yes. Especially if you are sitting on a stump sending out mass text messages to your children.

(This is not a band related post, fair warning)

My husband is ill, That is not new news. Lately (last couple of weeks) he has been struggling. Sleeping tons, throwing up, severe pain in his right side. He has liver disease so my thoughts turn to that in respect to where he is hurting. He is also a stubborn SOB.

I've asked him everyday for two weeks if he was ready to go to the ER. (the VA is where he seeks treatment but they haven't done crap for him but give him medication after medication) Everyday his answer is "Not today" I am so fucking sick of it. Just get your ass off the bed and go to an ER already. Instead he wakes up all night long, in pain, takes a hand full of whatever is in reach. Oxy, vicodin and checks back out. Then I can't go back to sleep. Not that I am trying to make it all about me but it has an impact on my life.

Today in the forest after my hike I planned an intervention with our children. If he won't go for him and he won't go for me perhaps he will go for them. You'd think, right?

That would be a BIG FAT NO!

When I returned to the house I told him that he needed to go or the kids would be up this afternoon to see to it that he went. I thought he was going to throw something at me. Good thing his side is hurting him or he probably would have. He said He is not going, that it is his body.

Aren't all bets off when you have a wife and children. Or is that just for Mothers? I mean, don't you want to live to see your grandkids or your child get married? (or perhaps reverse that order)

You know, if that man dies before June of this year I get squat! Nada! Nothing from the VA. With my luck he will hold out till May 31. That sounds cold. I don't mean it to but 26 years earns me the right to think about what I have vested in this. And that includes his pension and my medical coverage.


Holy Bat Shit! She's a going off!
Sorry for the rant but it really takes a lot to piss me off and I am so ticked I had to take an Ativan and I gave up my afternoon coffee for Lent so I am cranky....

So I am debating having the kiddo's even waste the time, fuel and energy on this. They've witnessed it for years. I guess it is my last ditch effort. I can't stand the thought of him telling them no. (which reads to me... you are not important enough for me to fight for)

I understand he is not himself, that depression, pain, painkillers have taken over his life. But where is the fight? He has all day, everyday (retired) to focus on his health. Lord knows I have taken over every other responsibility in our marriage, plus my own battles with health and happiness.

Where was I banded?